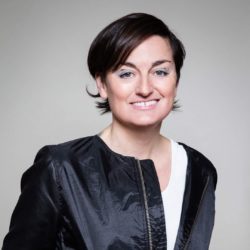 Zoe took her first steps down the comedy path in 2003 after training as an actress. She won the Funny Women Competition in 2004 and her debut Edinburgh show was nominated for the if.comedy newcomer award. Zoe has appeared in many TV shows including Mock the Week, The Wright Stuff, the Michael McIntyre Roadshow and BBC2’s Live At The Apollo. Zoe’s 2018 show “Entry Level Human” has seen her touring at venues across the UK.

Since emerging on to the stand-up scene in 2004, award-winning comedian Zoe Lyons has toured the world with her caustic shows.

Zoe graduated from the University of York in 1992 with a degree in Psychology. She took her first steps down the comedy path in 2003 after training as an actress at the Poor School in London. Zoe went on to win the Funny Women Competition in 2004 and her debut Edinburgh show was nominated for the if.comedy newcomer award. Since then, Zoe has toured the UK’s stand-up circuit, as well as playing regular gigs in London and Brighton.

In 2007, her debut solo show, “Fight or Flight”, was nominated for the best newcomer award at the Edinburgh Fringe Festival. In 2008, her second solo show, “Mangled Mantra of the Messed up Modern Mind”, featured a joke which was awarded digital television channel Dave’s Joke of the Fringe. Zoe’s television credits include appearances on Mock the Week, Michael McIntyre’s Comedy Roadshow, The Paul O’Grady Show, The Wright Stuff (as a regular guest panelist) and Dave’s One Night Stand. She also has regular radio appearances which include: The Jon Richard Show and 4 Stands Up.

Zoe featured in The Independent’s tenth annual “Pink List” for 2009, detailing the 101 most influential lesbian and gay people in Britain.

“Her material is diverse; flitting from one subject to another without breaking pace and she hits the right comedic tone every time”

“Probably the most impressive British female comic on the circuit.”

We have a great Bent Double lined up for this Sunday @KomediaBrighton ….see you there!

All aboard this fun episode of Lets Talk About The Husband with @stephencomedy and myself discussing our dream sailor outfits. Link to pods in Bio.

My online late night shopping after a glass of wine isn’t always ideal but on the plus side I now appear to own a 4kilo weighted vest.

Sadly all good quizes must come to an end but I can't tell you what a joy it was to work on @lightningquiz for @bbc2. We made 2 cracking series and I loved every second of working with my pals at BBC Belfast. Every contestant was a 🌟 and you can still catch up on @BBCiPlayer