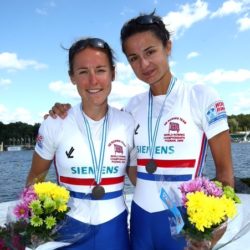 The daughter of a World Champion Rower, Hosking started the sport aged 14, winning a silver medal at her first junior World Championships in 2003. She joined the national team at 20 and alongside her teammate Kat Copeland was the first British lightweight oarswoman to win a Championship title in an Olympic-class event.

At the 2012 Olympic Games in London, Sophie Hosking raced in the lightweight women’s double scull with Kat Copeland. The duo won their final by over 2 seconds ahead of China, to become Olympic Gold medallists.

Sophie was subsequently awarded an MBE in the 2013 New Year Honours list.

During the 2012 World Cup Series, Sophie won a silver medal. At the 2011 World Rowing Championships Sophie won a bronze medal just a fraction behind the double from Canada. In Munich at the first World Cup of 2011 Sophie and her crewmate won gold.

Sophie started rowing at the age of 14 at Kingston Grammar School after gaining a sport scholarship. She established herself as the leading lightweight woman and in 2009 won the GB Rowing Senior Trials in the single, and with Hester Goodsell winning GB’s first ever lightweight women’s World Cup gold in the double in Munich. In Lucerne they won gold again establishing themselves as a strong partnership for the 2009 World Championships in Poznan.

Sophie joined Durham University in the autumn of 2004 and graduated in Chemistry and Physics in the summer of 2007. She is interested in most areas of sport and also enjoys listening to and playing music. Her father was a World Champion rower in the lightweight eight in 1980.