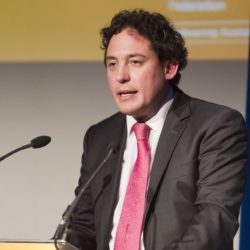 Prior to entering the world of broadcasting, Simon spent ten years in commercial and investment banking in London, New York and Bermuda. He has a degree in Politics Philosophy and Economics from Oxford University and is an accomplished host and interviewer on the corporate circuit.

Simon Jack is the Business and Economics Presenter on Radio 4’s flagship Today Programme. Simon is also known for being a financial journalist, broadcaster and the face of BBC Breakfast’s business news.

He has also presented business news on the BBC’s One O’Clock, Six O’Clock and Ten O’Clock News. During the banking crisis in September 2006 he covered the Federal takeover of Fannie Mae and Freddie Mac, the Bankruptcy of Lehman Brothers, the bailout of AIG and the Lloyds TSB takeover of HBOS.

Prior to entering the world of news-casting, Simon spent ten years in commercial and investment banking in London, New York and Bermuda. He has a degree in Politics Philosophy and Economics from Oxford University.

In 2015 Simon filmed a special edition of Panorama, in which he investigated the circumstances surrounding his father’s death in order to explore why more middle-aged men kill themselves than any other group.

“Simon facilitated the event very professionally, he did a magnificent job in piquing interest and keeping the audience interested.”

#LicoricePizza was immersive & captivating experience. stunning performances. An instant classic in The Last Picture Show type and league. So many moments to play again in your head. Like they’re your own memories. Gushing I know but best film I’ve seen in long time

Been listening to a lot of BBC 6 Music at weekends. Gilles Petersen really is a very skilful curator of sound. A mentally refreshing moment to oneself.

Coordinating timezones with this lot to kick off a special programme to start the New Year. Live in Singapore, London and New York chatting to @BBCMarikoOi @BBCSimonJack and @BizFleury 👋🏻