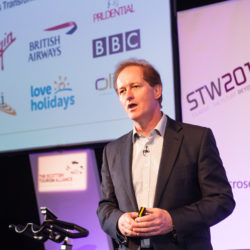 Roger has a wealth of experience as a driver of transformational change and his insights, solutions and stories have proven invaluable to organisations around the world. Roger seeks to understand the strategic, business and cultural challenges facing your organisation and tailors his presentation to have maximum relevance and impact on the audience.

Roger is a recognised CEO and leader in transformation change having driven change in global organisations including Virgin, British Airways, Prudential and the BBC.

Roger started his career at Virgin, working directly for Sir Richard Branson on deals and new business ideas. He became Commercial Director of Virgin Communications, working on the launch of Virgin Radio, the development of its global post-production business and the rapid growth and sale of Virgin Interactive Entertainment.

Roger then moved on to become General Manager of World Sales & Distribution at British Airways where he transformed the £1.2 billion distribution system for BA and subsequently the industry. He launched electronic ticketing and created ba.com with a simultaneous launch in 72 countries across the world.

Roger worked as Managing Director of Prudential Retail, the retail distribution arm of Prudential plc, with £2 billion in revenue and 6 million customers. Joining immediately after the pensions mis-selling scandal, he drove a major business transformation including the launch of new products, new distribution channels, a £200 million CRM programme and an innovative new sales process. As part of this transformation he led an exhilarating culture change for the 6,500 staff.

Roger acted as Chief Executive of BBC Ventures Group, running the media services for the BBC and other broadcast/IT customers around the world. His transformation and subsequent sale of these businesses created over £1 billion of value for the BBC. Roger was additionally on the Main Board of the BBC and an integral part of the BBC-wide transformational change programme.

“The team were galvanised by your session into challenging themselves to think differently and we made huge progress in the remainder of the meeting to hone in on the things we all committed to do differently to take our company to the next level.”

“A triumph. Roger presented at our Annual Leadership Event and the feedback from our guests has been incredible. Because he has actually been there and done it, he makes a convincing and entertaining speaker. His content is compelling and he presents in an elegant, thought-provoking way, with great humour. Our guests were seasoned business leaders and they found his talk both insightful and inspiring.”

“Your talk in Belfast was exceptional, inspirational and made a big difference to many in the room.”