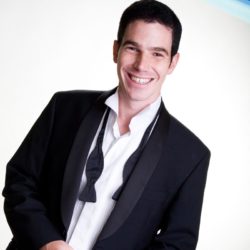 Rod is one of the fastest rising comics in Great Britain and described as "A young Dave Allen" by Peter Kay.

Award-winning comedian Rod Woodward has been heralded as a young Bob Monkhouse, his material is witty, topical and superbly timed.

Rod is the son of eminent Welsh sports writer, Karl Woodward, who recently retired as the longest serving member of the national newspaper of Wales, The Western Mail. He had planned to follow his Dad and take up a career in the media but, when offered a job as a studio audience warm up man at HTV Wales, Rod took a year out from university to pursue his childhood ambition of becoming a professional comedian.

Since then Rod has been tipped for the comedy premiership by such luminaries as Peter Kay and the late Bob Monkhouse after winning the Best Newcomer to Variety Award. Having supported Paddy McGuinness and Russell Brand on tour, in 2008 he won the BBC 1 Wales comedy competition Funny Business. Rod has performed at Planet Hollywood in Las Vegas ahead of Joe Calzaghe’s super fight with Bernard Hopkins and to celebrate Cardiff City reaching the FA Cup final, Rod wrote and performed comedy song ‘Do The Ayatollah’ backed by more than 100 Bluebirds fans. Set to the tune of the Macarena, it was a YouTube sensation and was featured on network radio and television shows, including Soccer AM and GMTV.

More recently he was invited to host Max Boyce’s 50th Anniversary Celebration at the Wales Millennium Centre and appeared on a St. David’s Day special on Welsh television.

The highlight of Rod’s career was being invited to perform at the London Palladium before William and Kate, the Duke and Duchess of Cambridge, on the Royal Variety Performance.

“He has a rare intelligence which puts me in mind of Bob Monkhouse, the material being witty, topical and superbly timed…”

“‘Who’s the best speaker you have ever heard?’ is arguably the question I am asked most often… Many names leap to mind. Rod Woodward is one of them.”

Bryn Williams, Toastmaster to the Queen

So sad to hear about the death of Phil Bennett.

It goes without saying that his rugby achievements were legendary.

But more importantly he was just the nicest, most humble and genuine man you could ever wish to meet.

Thoughts with Pat and the boys. 🙏

🎭Delighted to launch my Swansea Grand 125 Project.@SwanseaGrand Theatre is 125 years old on 26/07/22🥳To mark this historic milestone I will release 125 videos on YouTube over the next 12 months
Subscribe👉https://t.co/Wiv8cVXQ39

With the season well and truly underway, legendary golfer and instructor Paco Degamin shows that golf is really a simple game for simple people…