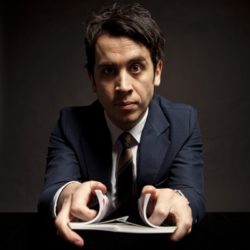 Pete starred in BBC One’s prime-time Saturday night programme ‘The Magicians’ and recently made special guest appearances on ITV1’s ‘The Next Great Magician.’ His skill for fusing magic and comedy has made him one of the most in demand magicians working on British television.

Pete is recognised as the UK’s leading comedian/magician. He starred in BBC1’s prime-time Saturday night programme ‘The Magicians’.

His skill for fusing magic and comedy has made him one of the most in demand magicians working on British television, writing and performing in magic shows such as ‘Monkey Magic’ (FIVE), ‘Dirty Tricks’ and ‘Derren Brown’s 3D Magic Spectacular’ (Channel 4) and ‘The Secret World of Magic’ (Sky One).

He has also made dozens of guest appearances on programmes like ‘The One Show’, ‘The John Bishop Show’, ‘BBC Breakfast’, ‘The Sarah Millican Television Programme’, ‘Celebrity Mastermind’, Gordon Ramsay’s Cookalong Live’, ‘Comedy Rocks with Jason Manford’, ‘This Morning’, ‘Edinburgh Comedy Fest Live’, ‘Comedy Cuts’, ‘Saturday Live Again!’ and ‘Something For the Weekend’.

He is also an accomplished television presenter, having fronted the gameshows ‘Stakeout’ and ‘Wait For It’ for BBC1 and ‘The Body Shocking Show’ for E4.

‘Tricks To Freak Out Your Friends’ is Pete’s first book for the public. A beginners magic book for the 21st century. So successful was it in the UK, it was also released in the USA and is about to go into its second print run.

Pete has performed 9 years in a row at the ‘Edinburgh Comedy Festival’ as well as the ‘Just For Laughs Comedy Festival’ in Montreal, which is by invite only. He has toured the UK with 5 solo theatre shows, most recently ‘Trickster’ in 2014.

“Pete had everyone in stitches all night and was very easy to work with. All colleagues said that it was their best ever event to date!”

“He is the funniest and by far the most accomplished performer on the New Magic scene…funnier than most comedians and more magical than Dumbledore on a good day. This guy is a complete star!”

I see #DragonsDen is back on @BBCOne tonight. Is it too late to get my pitch in?

My favourite scene from Rocketman