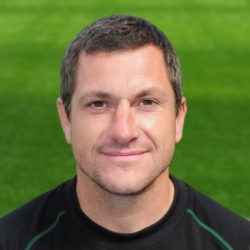 Paul is the all-time highest scorer for Northampton Saints. Since retiring from rugby Paul has set up a performance consultancy firm, Actuality with Ex-Hampshire Cricketer, Ricky Ricketts. Actuality works with individuals and teams, in both sport and business, to find the zone for peak performance through correct mental preparation.

As former fly-half, Paul is the all-time highest scorer for his former club the Northampton Saints.

Paul made his first appearance for the Saints in 1993 and went on to score 2,784 points in 259 games, winning a Heineken Cup winners’ medal with the club in 2000. He also scored 400 points in 32 appearances for England, a total only exceeded by Johnny Wilkinson.

During his playing career, Paul was a member of the victorious British & Irish Lions squad that toured South Africa in 1997 and the 2003 England squad, who won the Rugby World Cup under Clive Woodward in Australia. Paul went on to become the joint-Saints boss in November 2004, steering the club away from relegation on the last day and after taking sole charge Paul went on to lead the team to the Heineken Cup semi-finals three years later.

Since leaving Northampton Saints Paul set up a performance consultancy firm, called Actuality with Ex- Hampshire cricketer, Rickey Ricketts. Actuality works with individuals and teams, in both sport and business, to ensure that when individuals need to perform the quality of their mental preparation and ability to control their emotions, are reasons for success not failure.

Paul still remains a familiar face in the rugby world as a prominent rugby broadcaster on both the BBC and BT Sport.

On air @5livesport Extra 1245 for @LeicesterTigers v @connachtrugby with @paulgrayson10. Both sides with great wins on opening weekend, Tigers looking to go 10/10 this season. Join us!

Ahead of return of @ChampionsCup check out our bonus RUW pod. Top chat as ever from @paulgrayson10 & exclusive interviews with a host of Euro titans including Ronan O’Gara & Johnny Sexton: https://t.co/c6IMC7ujB6

Last week we did something amazing…Thank you @matt9dawson for helping your old mate. Everyone @HomeNorthampton you did a superb job. 🙏

The room is all ready and looking very festive 🎉🥂🍴🏈, ready to welcome our guests for this evening’s Charity Sports Dinner with @matt9dawson @paulgrayson10 #fundraising #Northamptonshire #supportinglocalfamilies #becuasechildhoodcantwait