Neil combines the worlds of business and extreme sports to inspire his audiences to achieve “big goals”. His experiences as a business owner, senior sales executive in a large US company, and in extreme sporting events is applied to enable businesses and individuals to achieve more in all aspects of their lives.

Neil is an Executive Mentor & Coach, Sales & Leadership Development Consultant, and Keynote Speaker whose passion enables others to challenge themselves and break through their mental and physical barriers.

It was at IBM, shortly after leaving school, that Neil moved into sales and found his passion for selling. Neil finished his career as European Head of Sales managing 450 sales people in 60 countries across Europe.

As a member of the British Army Reserves Neil went on to complete some of the toughest challenges set for British soldiers. He was commissioned as an officer through Sandhurst College, where he spent time with the Army Reserves and Bomb Disposal Unit. The army sparked Neil’s deep interest in physical challenges, and as a result in 2003 he completed his first Marathon. This subsequently led him onto more extreme physical challenges including an Ironman, the Marathon Des Sables in the Sahara desert, the Ultra Trail de Mont Blanc, the Kalahari Augrabies Extreme Marathon in the South African desert and the Yukon Arctic Ultra – a 300 mile foot race in -55 degrees centigrade, which he won.

Today, Neil is the founder of Extreme Energy – XNRG – Ltd who organise single and multi-day ultra-distance events in the UK. He is also a coach, consultant and teacher who helps companies develop their leadership and sales teams.

Neil works closely with his clients to identify and deliver the right solution to help you achieve your goals, no matter how complex they are. Neil’s mantra on big goals is to “Never Ever Give Up”. He translates his experiences and findings from the world of extreme sports to deliver compelling takeaways for his corporate audiences.

“Neil is an exceptional leader who used his experiences, from his army career, his  business life, and his sporting achievements to motivate those around him to achieve objectives they would not have thought possible.”

“Neil brings the best out of those around him and I regard him as one of the key contributors to my own personal success over the last eight years.” 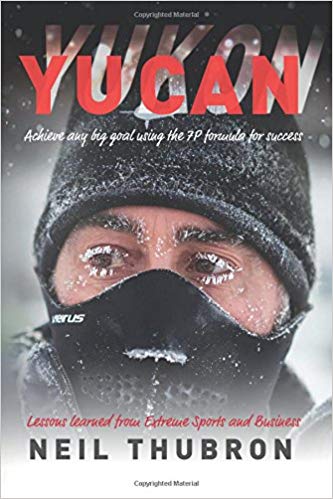 Have you ever wondered why some people can achieve such amazing goals in their business or personal life ? I believe we can all achieve extraordinary goals in all areas of our lives? If you have a big dream, but think “I can’t – it’s too big, too ambitious, to extreme…” this book is for you. I used to have all those thoughts. Before I ran my first 10km run, no way did I think about a 300-mile foot race, the Yukon Arctic Ultra, in -55 degrees...