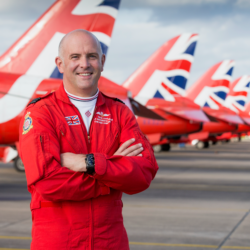 With over 20 years experience in the Royal Air Force, and the longest serving RAF Red Arrow & New Blades pilot, Mike has worked in a constantly challenging, yet exhilarating environment. He offers a fresh insight into this fast-paced, elite world.

Mike has taken part in a record 10 display seasons with the Red Arrows. In that time he flew 2,585 sorties in Red Arrows aircraft, played a part in 700 public displays and flew a red Hawk jet into 46 different countries; as far west as New York and as far east as China.

Mike achieved his childhood dream when he was selected to join the Red Arrows for the 2008 display season to fly as Red 3 before then being chosen as Red 7 in the prestigious Synchro Pair for 2009. In March 2010, while leading the Synchro Pair as Red 6, Mike survived a head-on mid-air training collision at a closing speed of over 750 mph. A low-level ejection caused major injuries resulting in surgery and months of rehabilitation before Mike could get back in the air.

In 2012 Mike flew as Red 9 in flypasts for major events including the London 2012 Olympics Opening Ceremony and Her Majesty The Queen’s Diamond Jubilee. Other career highlights include racing a jet against four-time Formula One World Champion Lewis Hamilton in his F1 car. These achievements have made Mike a familiar face across the air display scene.

Mike was awarded an MBE in the Queen’s New Year Honours List at the end of 2017 for his services to the Red Arrows, and subsequently received the Masters Commendation from the Honourable Company of Air Pilots in October 2018. He became a Fellow of the Royal Aeronautical Society in March 2019.

Mike left the Royal Air Force in April 2019 after 21 years of service. He has since become a commercial pilot and flight instructor and is a full-time member of the Blades Aerobatic Team, the world’s only aerobatic airline. In this role he performs public displays but also relishes in the opportunity to give passengers the chance to experience close formation aerobatics in a team of all ex-Red Arrows pilots.

“It was a truly inspirational talk, delivered with great professionalism and included many amazing still pictures and video shots. In the many years I have attended such presentations at IMechE, I have rarely seen such a positive and welcoming audience to a speaker.”

Tony Roche, President at the Institution of Mechanical Engineers

That is one cool video 😎

Still haven’t worked out what this dude/dudess was up to in a Cessna during the race.

Can anyone in the Twittersphere shed any light? 🤔

I do love the #BritishGrandPrix

The best view of #Silverstone from the Grace Spitfire earlier in the week, ready for the #BritishGrandPrix 😍