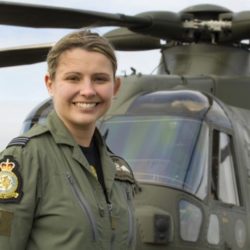 Michelle was the first female pilot to be awarded the Distinguished Flying Cross (DFC), for “an act of valour, courage or devotion to duty. Michelle recounts this brave feat and wider experience of working as a female helicopter pilot in the RAF with great humility and insight.

Pilot Flight Lieutenant Michelle Goodman was awarded the Distinguished Flying Cross (DFC) in 2008, the first time the honour had been awarded to a female pilot.

The DFC, awarded for “an act or acts of valour, courage or devotion to duty whilst flying in active operations against the enemy” was awarded to Flight Lieutenant Goodman following a sortie during her second two-month tour as part of the Joint Helicopter Force (Iraq) in support of Operation TELIC.

On 1st June 2007 she was the aircraft captain of the Incident Reaction Team (IRT) Merlin helicopter based at Basra Air Station. At 23:15 hours, Flight Lieutenant Goodman was alerted that there was a serious casualty following a mortar attack on an isolated British location in the centre of Basra City. Intelligence reports indicated a large, ‘spectacular’ attack would occur somewhere in Basra, with a helicopter being a possible target. Alert to the high risk, but being fully conscious of the importance of providing unfailing IRT support to ground forces, Flight Lieutenant Goodman elected to fly her approach, whilst under enemy direct and indirect fire. Without the IRT, the casualty would have died within 15 minutes.

Despite extreme pressure, Michelle made the right decision in what was later described as a bold and daring sortie which undoubtedly saved a life.

Michelle recounts this brave feat and wider experience of working as a female helicopter pilot in RAF with great humility and insight.