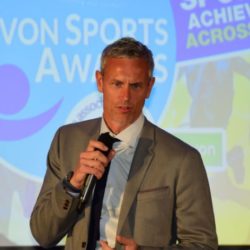 Mark Foster burst onto the International swimming scene, at the age of 16, representing England at the 1986 Commonwealth Games. He then went on to represent his country for 23 years and became one of Britain’s most decorated male swimmers.

Mark’s post swimming career has seen him reinvent himself as a successful motivational speaker. His relaxed and natural ability to engage with a variety of audiences, from all walks of life and about a wide range of subjects, makes him highly sort after. Recently Mark has begun working with Jim Rees the Ultra Cyclist and Executive Coach and together they founded The Long & The Short Of It. Their programme focuses on the mental and emotional discipline required for elite competition and applies these disciplines to the corporate workplace to improve performance. Mark has also been a regular blogger for the Huffington Post on current issues, sport and lifestyle and has co-written sports columns for several newspapers both in print and online.

Mark has also become a familiar face on television with his award winning partnership with Clare Balding from the aquatics centre during the Olympics in 2012, making him a household name. Since 2012 he has graced the TV screens with regular commentating slots at the Commonwealth and World Championships. More recently, Mark formed yet another popular media partnership commentating from the pool at the Rio Olympics with Rebecca Adlington and Helen Skelton. This high-energy partnership became one of the most popular commenting teams during the Rio Fortnight. Other TV appearances include: Countdown, Question of Sport, Come Dine With Me, Who’s Doing the Dishes, Celebrity Masterchef, The Chase as well as a host of other charity shows and campaigns such as Sports Relief and Dancing On Wheels.

Mark has always retained his passion for swimming and in May 2013, he set up The Mark Foster Swimming Academy. The Academy runs twice a year across the country and helps aspiring young swimmers from the ages of eleven to eighteen, improve their performance by applying an all-round fitness regime both in and out of the water. Aside from his work with the academy Mark also supports a number of charities including the International Children’s Trust, The Dogs Trust, Battersea Dogs Home, Sports Aid and is a patron of The Anaphylaxis Campaign, the UK charity for people with severe allergies. In addition, Mark mentored the swimmer James O’Shea to help him compete in the 2012 Para-Olympics.

Lucky enough to go to the opening night of @cirquedusoleil @royalalberthall last night. An awesome show…. If you get a chance.. go!! Have a great weekend. 🙏🏻

Great catching up with @ollyfosterfitness and Dave. The @theshirelondon in great shape considering the weather we have had. The flag in the pic.. a charity that’s close to everyone’s heart at the shire @its.neveryou

Not an expected highlight of the weekend but one we won't forget in a hurry ☔
Impromptu FitSteps Class on the comedy carpet after being evacuated from the tower, we really do keep dancing whatever the circumstances! 💃🕺👯