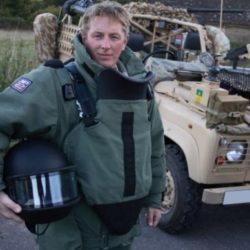 Capitalising on his unique experiences in the high-pressure, high stakes world of bomb disposal and intelligence, Chris has been able to develop the skills, psychologies and life-or-death decision-making processes translating them to the current needs of the commercial world.

Chris joined the British Army at sixteen and within three years was selected to undergo officer training at the Royal Military Academy Sandhurst.

Chris spent the majority of his 17 year career serving as a high threat bomb disposal operator and during that time served with a variety of specialist counter terrorism units. These included four years with the UK Special Forces and an attachment to the Security Service (MI5).

During his career he deployed to a number of operational theatres, and for his actions during an Iraq bomb disposal tour, he was awarded the Queen’s Gallantry Medal. His citation read: ‘There can be few other individuals who have so willingly played Russian roulette with their own life to safeguard the lives of others’.

Chris ended his military career working as an intelligence officer, and since retiring from the army has embarked on a successful career as a counter-terrorism specialist, businessman, author, motivational speaker and broadcaster. He has written two Sunday Times Bestsellers; has presented the Military History Channel’s acclaimed Bomb Hunters documentary; and is a regular contributor to television and radio news and current affairs programmes. He was listed as one of the ‘Top Five Inspirational Speakers’ of both 2011 and 2012 by the JLA Speakers Agency and in 2012 he was selected to be one of 15 Ambassadors for Prime Minister David Cameron’s youth development initiative – the National Citizen Service.

By capitalising on his unique experiences in the high-pressure, high stakes world of bomb disposal and intelligence as well as four years attached to the British special forces, Chris has been able to develop the skills, psychologies and life-or-death decision-making processes learned in his former career, and translates them to the current needs of the commercial world. The result is a compelling and highly-rewarding experience, offering businesses and organisations a range of unique and alternative methods for taking calculated risks, developing teams and dealing with extreme pressure in every aspect of life.

“Inspirational, thought provoking and moving. Chris presented to our sales & marketing community – a team that has gone through change and is under no small pressure to raise the bar in terms of delivery and success…He was an excellent speaker and I was totally engaged throughout. Despite having worked in such an extreme and diverse environment, his style of delivery and humour made it easy to get real learnings from how to cope with pressure and keep motivated to take back to the corporate world. Highly recommended.”

“As always, we were extremely happy with how the event went and Chris was absolutely fantastic. We have had some really positive feedback from guests who said how fascinating he was and could have quite easily listened to his life experiences for much longer. ”

From joining the army at 16 to Bosnia, Northern Ireland, and becoming a bomb disposal expert. A fascinating start to day two of #FoBrands with Major Chris Hunter QGM.

Listening to "How to Be Calm Under Pressure: Leadership Lessons From a Bomb Disposal Expert with Chris Hunter QGM" at https://t.co/735yh2HbPj

Such an honour and a pleasure working with #Mediatel at the The Future of Brands event in London this morning. Many thanks to @OmarOakes for being a great host and to @samtidmarsh1 and #ShenyanaLim for making it all happen. Such a great day with truly awesome people.

Today I interviewed a bomb disposal expert. I bloody love my job, even if other jobs are far more important!