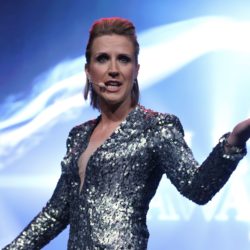 Katharine was fastest woman in the world over 400m at the age of 26. Since retiring from Athletics, Katharine has become a sought after Live Events Presenter and has hosted major Athletics events and Championships in the UK, Europe and America.

Katharine is a rare Athlete who had outstanding success at both junior and senior level athletics. Having been the fastest girl in the world aged 14, 12 years later she became the fastest woman in the world over 400m.

Since Katharine’s retirement from Track & Field in 2005 the Olympic medallist has worked within the Event, Sport and Media industry at the same level that she enjoyed in her competitive career. Katharine is a hugely popular Event host who is able to absorb a brief and use her years of experience and knowledge to deliver on message, informative and entertaining commentary and interaction with the audience. Her unflappable nature and attention to detail, means that she can adapt to any situation and brings the best out of people she interviews.

Katharine is, in fact, the only female TV lead Commentator in Athletics, which has seen her working at numerous Olympic Games, Commonwealth Games, European Championships, as well as lead Commentator for Channel 4 at the Paralympics and Paralympic World Cup events.

Katharine has the versatility of being an established broadcaster and host around the World. Whether infield in the USA, live television presenting or behind the microphone being a lead commentator, she excels in her sport of Track and Field as well as Netball, Triathlon, Pentathlon or Beach Volleyball! Her sporting knowledge helps her hold her own as a regular guest on BBC Radio 5 Live’s “Fighting Talk” panel show and on a variety of established television and radio programmes.

Post retirement Katharine has also established herself as an engaging, insightful and entertaining speaker for a variety of organisations from corporate companies like Lloyds to those in the sporting and teaching world. Inspiring all with her journey from a 10 year old with an Olympic dream to being an Olympic medallist, she shares her journey plus the skills and disciplines involved.