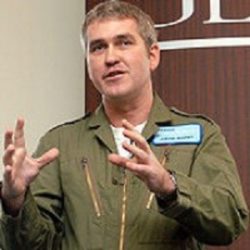 Justin founded Mission Excellence, specialists in high performance teamwork and delivery. He is a renowned presenter on leadership, execution and risk.

Justin joined the RAF aged 23, having previously served as an Army Officer. During officer training, he was awarded the Wilkinson Sword for Outstanding Leadership, graduating as the top cadet of his entry. After completing flying training, Justin went on to fly the Tornado F3, the RAF’s front-line air defence fighter aircraft, taking part in both training and operational deployments all over the world, including support of UN peacekeeping operations in Bosnia. He was subsequently selected for the Red Arrows, serving the team for three years, performing in over 250 displays worldwide which included three international tours. During his time with the Red Arrows Justin was promoted to Deputy Team Leader and then Executive Officer, responsible for operational day-to-day management of the team.

On leaving the RAF, Justin founded Mission Excellence, an organisational performance consultancy focused on improving clients’ ability to execute. Consultants are predominantly former military fighter pilots including several Red Arrows. Areas of intervention include advanced planning and problem solving, team and leadership development, teamwork in high-risk environments, and achieving continuous improvement. With an MBA with Distinction from the London Business School, Justin is also an investor and founding partner in a retail fashion business and is currently a non-executive adviser to Inox, a market hedge fund.

Justin is also an established and highly recommended keynote speaker with presentations focused on leadership, teamwork, accountability and commitment. In 2004 Justin addressed Europe’s largest gathering of business leaders; the Institute of Directors’ Annual Convention at the Royal Albert Hall and in 2007, he was invited to speak at the Middle East’s Premier Leadership Forum, ‘Leaders in Dubai’, alongside Kofi Annan and Sir Richard Branson.

“What differentiates Justin is the immediate benefit. People really bring it back to the office.” 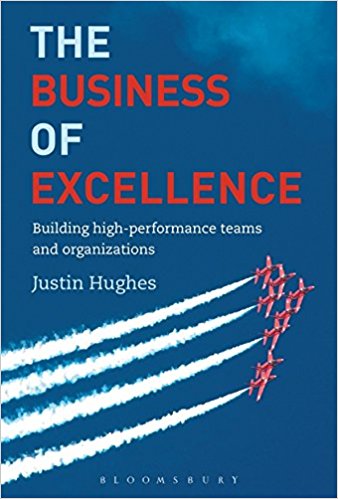 The Business of Excellence: Building high-performance teams and organizations

The Business of Excellence offers a unique and compelling perspective on the drivers of excellence in teams and organizations. The author, Justin Hughes, brings an unusual mix of experience and insight, having worked as a management consultant to some of the world s most successful organizations, in addition to having served for 12 years as a military fighter pilot, where he became Executive Officer on the RAF Red Arrows. The challenges of high performance and leadership are explored in depth, and are illustrated with insights, interviews and case studies from the military, sporting and corporate worlds...