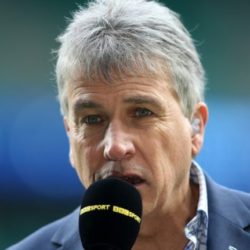 One of Britain’s leading broadcasters, John is a versatile and amusing conference host, with the ability to chair and facilitate high level industry debate, interview headline speakers and engage with the audience.

John Inverdale is one of Britain’s foremost sports presenters.

The son of a Royal Navy dental surgeon, John Inverdale was born in Plymouth in 1957. He attended Clifton College in Bristol and went on to gain a degree in history at Southampton University before embarking on a career in journalism.

John began his career as a reporter for the Lincolnshire Echo before moving to BBC Radio Lincolnshire in 1982. His first job with network radio was in 1986 as a sports reporter for BBC Radio 2 and a news reporter for Radio 4 on the Today programme. In 1988 he became presenter of Sport on 2 which he hosted for six years until the advent of Radio 5 Live when he moved to a daily news programme.

In 1997 he was named Broadcaster of the Year at the Sony Awards, and in 1998 Radio Personality of the Year by the Variety Club.

His television career began with BSB in 1990 as presenter of rugby and football, and on the BBC, he presented Rugby Special from 1994 to 1997.

John hosted his own BBC1 sports chat show Onside for seven series, and is a regular presenter on current sports programmes including Wimbledon. John has also hosted ‘The World’s Strongest Man’, which regularly attracted audiences in excess of 10 million.

Married with two daughters, John’s biggest sporting passion is rugby union, and he is closely involved with Esher RFC. He is also a self-confessed pop trivia bore.