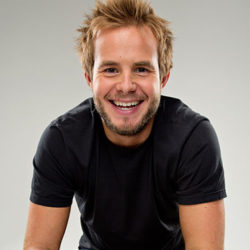 A highly regarded young stand-up and comic performer, Jimmy performs on the UK and international comedy circuit to great acclaim. He often provides the studio warm up for BBC 1’s The Graham Norton Show, ITV’s Loose Women and Channel 4’s Deal or No Deal.

Jimmy is a top comedy circuit act in the UK, as well as a highly sought after corporate awards host and TV warm up artist.

Jimmy’s career was kick started in 2005 after reaching the finals of the prestigious ‘BBC New Talent’ competition and performed in the Amused Moose Hot Starlets Showcase at the Edinburgh Festival. He then began working full time as a stand-up comedian performing in theatres, clubs, arts centres and universities all over the country and abroad.

Performing stand up all over the world, Jimmy has appeared on numerous television and radio programmes including the BBC, Channel 4, Channel 5, Comedy Central, ABC Australia, THREE New Zealand, Absolute Radio and many more.

He took his first solo show, ‘Jimmy McGhie’s Northern Meeting’, to the Edinburgh Festival in 2009 receiving rave reviews and returned in 2010 with his solo show ‘Jimmy McGhie – The All-Powerful Warrior Who With His Endurance And Inflexible Will To Win Goes From Conquest To Conquest Leaving Fire In His Wake’. In 2011 Jimmy returned to the festival with the show ‘Jimmy McGhie – Artificial Intelligence’.

“Jimmy spoke to me at length before the evening to gain an understanding of his target audience and tailored his act to suit the audience. He was largely relevant in his content and kept it at a funny yet not to blue level. Proportionate to the surroundings really.”

“He was the perfect balance to what we needed for our event, he was just perfect for our 205 employees. It was hard for him to judge how risqué he could be but he read the room well and entertained us all for his 20/25 mins – which again was spot on. ”