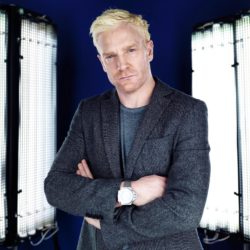 Iwan is without doubt one of the finest 400m runners that Britain has ever seen. Securing medals at all major championships, Iwan still holds the British 400m record, after 20 years. He is a TV presenter on the BBC and Channel 4.

Iwan is without doubt one of the finest 400m runners that Britain has ever seen. Securing medals at all major championships, Iwan still holds the British 400m record of 44.36s, after 20 years. Not only talented in Athletics, Iwan competed internationally in BMXing, where he was ranked 4th in Europe.

Iwan stormed the athletics scene in the 1998 winning Gold in the 400m and the 4x400m at the European Championships in Budapest. That same year, he represented Europe against the other continents of the World at the World Cup in South Africa, again winning medals in both events, he then flew straight to the Commonwealth Games in Kuala Lumpur where he became champion of the Commonwealth winning a bronze medal for Wales in the 4x400m relay, and a gold in the 400m.

He was part of the Channel 4 team at the World Championships in Daegu and did a series of features which helped to motivate young people to get active with a year to go until the London Olympics.

Iwan is an experienced TV presenter with regular features on BBC’s The One Show, which has seen him report on a wide variety of topics; in addition to hosting all the major British Athletics events. Most recently, Iwan has survived ‘The Island’ with Bear Grylls.

“It wasn’t easy getting to his goal but then having got there to have suffered injuries we meant he couldn’t continue must of been quite difficult. So to then pick yourself up and focus on new challenges is a great inspiration to us all.”

“Iwan had the most impact throughout the day for me as he spoke with such conviction.”

Best day ever with Teddy…. Life goes fast so cherish every moment ❤️

Watching Teddy fighting for his life in intensive care was the worst experience of my life. That's why I'm so passionate about supporting the #BumpItOn campaign. If I can reach just reach 1 family so they don't have to go through what we and many others have. Visit @GBSSupport ❤️

Thanks to @GBSSupport for all the work they do ❤️