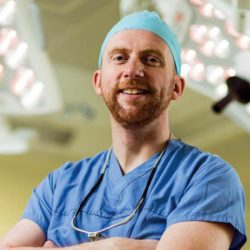 Honorary Associate Professor at the University of Liverpool

Iain Hennessey is a consultant paediatric surgeon and director of innovation at the new Alder Hey Children’s Health Park. He is responsible for finding and developing the healthcare technologies of the future.

“Iain is a born communicator – leaving audiences feeling like they’ve learned a lot, uplifted and in awe of the work he and hi steam do. It’s easy to think of ‘out there’ future scenarios, but Iain is an evidence-based reality check!”

“A talented inspirational speaker who not only is a specialist in his field of medicine but also continually looks for ways of improvement, looking for the next thing and learning from mistakes, creating a safe environment where possible to test.”

“Enlightening and many nuggets within his presentation which we can use in our own business.”

“Iain’s stories certainly touched a lot of hearts… he gave our audience a greater sense of meaning and purpose.”