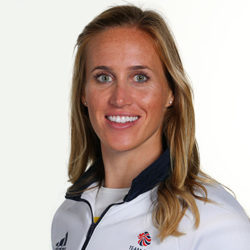 Helen Glover was one of the most prominent sporting stars to emerge from the 2012 Olympic Games, typifying the ideal that hard work breeds success. Now a two time Olympic champion, triple World and European champion, and quintuple World Cup champion, she has been described by GB rowing coaches as a ‘once in a generation athlete’. What few realise though is that Glover had never even sat in a row boat just four years before topping the podium at London 2012.

Helen grew up in Penzance, where her father runs the local ice cream shop. Despite junior international representation at running and hockey, she seemed destined to take up a career as a sports teacher. On a whim she signed up to the talent ID program ‘Sporting Giants’, and was earmarked by British rowing as a rare talent. Within months she began her world beating career with under 23 champion Heather Stanning. After world championship silver, they took their first gold and were never beaten again.

Following London 2012 Heather took a year with the army in Afghanistan, and Helen was forced to partner another rower, remaining unbeaten and taking another World title. The Olympiad was fraught with challenges including bike crashes, illness, injury and their trusted coach Robin being diagnosed with cancer. Helen battled through, becoming the number one ranked rower in the world.

Helen has not retired from rowing, and is leaving the door open for a possible return for the Paris Olympics. During her break from professional sport Helen has embarked on a variety of other ventures, with standout achievements including broadcasting for Radio Four’s ‘After Gold’, authoring ‘Great Lives’ also for Radio Four, presenting Japan’s secret Wilderness for BBC2, commentated on rowing for BBC Sports, and appearing on a variety of shows including Question of Sport, Strictly Come Dancing for Children in Need, Celebrity Pointless, the Celebrity BoatRace and the Apprentice.

Thanks @TimesMagazine for chatting to us about our book Wildlings! We are so happy to be sharing ideas for adventure & tips from truly inspiring friends. I’d love it to be a handbook that leads you & your kids (of all ages) to wild adventure 💙 it’s out Thursday!📸 Tom Jackson

How to rewild your child — by Britain’s really wild couple

Adventurer @SteveBackshall and Olympian @Helenglovergb are on a mission to get a generation off their screens and outdoors. They tell Michael Odell why https://t.co/sRZhTCfNyn

BBC The One Show@BBCTheOneShow·
29 Jun

If you're a parent, @Helenglovergb and @SteveBackshall have the perfect book full of ideas to get your family out to the great outdoors 🌱

BBC The One Show@BBCTheOneShow·
29 Jun

Tonight on #TheOneShow, we'll be chatting to @Helenglovergb and @SteveBackshall about their new book 'Wildlings' 📖

Join me in the #FajitaFriyayChallenge, upload your best “Fajita FriYAY”, tagging @oldelpasouk and @teamgb. Every entry = 1 fajita kit donated with @Fareshare. For full T&C’s, visit https://t.co/G4aQh5JcLb