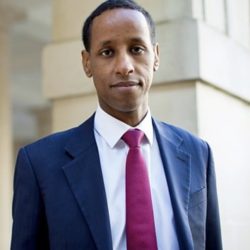 From child refugee to barrister, Hashi attended both Oxford University and Bar school on full scholarship. He is a presenter on BBC Radio 4 and commentator across leading newspapers. Hashi uses his personal journey to draw powerful conclusions about resilience, focus and the ability to adapt in the pursuit of success.

Hashi Mohamed is one of the UK’s leading junior barristers in planning and public law. He was Special Adviser to David Anderson QC, the Independent Reviewer or Terror Legislation (2015-2017). He also practises in environmental, human rights law and commercial litigation.

One of 12 children, Hashi’s father died when he was 9. Soon after Hashi came to the UK as an unaccompanied child refugee from Kenya in the summer of 1993. When he arrived he spoke basic English, attended failing schools and was raised exclusively on state benefits in a deprived area of North West London.

Today, at 33, as a barrister and broadcaster, Hashi has attended both Oxford University and Bar school on a full scholarship. He is also a presenter on BBC Radio 4 and commentator across leading newspapers. Drawing on his own experiences he wants to dispel the myth that upward mobility is possible through sheer hard work alone and speaks out against empty tokenism.

Hashi’s speaking style is at once realistic and inspirational and he is not afraid to talk about hard truths. From refugee to barrister, he uses his personal journey to draw powerful conclusions for business – about resilience, focus and the ability to adapt in the pursuit of success. Whether he is talking to CEOs of big corporations, judges, politicians or underprivileged pupils – he creates an immediate and powerful connection with people. As a broadcaster his work has been highly acclaimed including BBC Radio 4’s ‘Adventures in Social Mobility’ and his viral Guardian Opinion piece ‘Telling children “hard work gets you to the top” is simply a lie’.

Hashi is fast becoming a sought after motivational speaker. He also chairs and hosts events and panel discussions in the UK and abroad.

“How can one not be touched by this story and reflect on how a boy of nine who had nothing & could not speak the language had it in him to get out of this deprived environment to become who he is now. Still thinking about it 3 days later!”

“I enjoyed and found Hashi Mohamed extremely motivational and took a great deal from his view on self-belief.”

“Very motivational for me, I really related with Hashi’s story.” People Like Us: What it Takes to Make it in Modern Britain

Raised on benefits and having attended some of the lowest-performing schools in the country, barrister Hashi Mohamed knows something about social mobility. In People Like Us, he shares what he has learned: from the stark statistics that reveal the depth of the problem to the failures of imagination, education and confidence that compound it.

Ted Cruz is just such a parasite.

My colleague @Dannythefink is glacially clear in @thetimes today about why the Sue Gray report is a smoking bazooka. People denying it are living in fairyland.

This was one of the best podcasts I have ever been asked to be a part of: @CatherineECarr is such a compassionate and kind interviewer. This article shows her light in abundant fashion. @relatively_pod https://t.co/4hDzMmvIkz