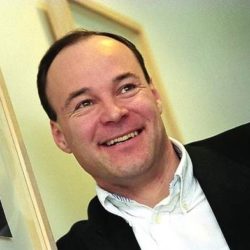 With a CV that The Times commented “takes some beating”, Hamish followed academic and sporting success with a very fast track career through a number of high profile business roles, including CEO of Eurostar and setting up Sainsbury’s Bank.

Hamish Taylor has enjoyed a long career in building and overhauling brands, first at Procter & Gamble, then at Eurostar where he become CEO, and subsequently at Sainsbury’s Bank.

He is now a brand expert and public speaker.

With a CV that The Times commented “takes some beating”, Hamish Taylor has managed to follow academic and sporting success with a very fast track career through a number of high profile business roles. As a result Hamish has established a winning record for driving innovation and change in a number of very different environments.

In 1997 he moved to Eurostar as Managing Director of Eurostar (UK) Ltd at the age of 36. The business was three years old and his remit was to reduce the major losses the operation was suffering. After two successful years in this role, he was appointed as Chief Executive Officer of Eurostar Group.

At the end of 1999 Hamish was appointed as Chief Executive Officer of Sainsbury’s Bank. Once again, the objective was rapid growth in profit from the breakeven position he inherited. The ability to innovate and move away from traditional banking approaches in order to behave more like a retailer, proved the key to the significant growth that resulted.

In 2004 Hamish established his own company, the Hamish Taylor Skills Exchange Network.

Hamish is also regularly featured in the broadcast media, his most recent project being the “Teen Canteen” television programme for the BBC.

“Hamish’s presentations crackle with energy and original insights that make even our group of top-level, seasoned, high-achieving UK business and public sector leaders think ‘Crikey: that’s inspiring! Why didn’t I think of that!?’ And these are people who it’s hard to impress…”

“One of the best presentations I have ever seen, let alone had the good fortune to Chair”

“People were really impressed by Hamish’s presentation style, he speaks with lots of passion and moves around a lot which everyone seems to have enjoyed. People also liked all the little stories he shared with us about examples of things that he has been involved in throughout his career”.

My son showing me how to broadcast! At least my office is warmer.

Great day out in north London with @EdinburghRugby . Fantastic win at Saracens.

How do you successfully balance #trust, #CX, #simplicity and #growth in increasingly complex organizations? Intriguing discussion led by @AndrewTStephen with @OxfordSBS @rachelbotsman & @HamishWTaylor. Oxford Bank of the Future programme in partnership w @Teradata.

Many thanks, David. Very kind comments. A great industry on the verge of bounce-back. I’m really looking forward to seeing some of the exciting initiatives planned.