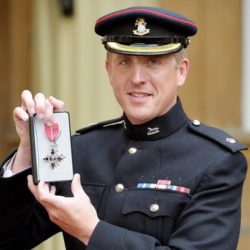 Edward is currently the national lead for implementing digital technology solutions into secondary care providers across NHS England. He is also Managing Director of Milifix, a company he founded to support ex-Forces transitioning into the civilian job market.

Edward commissioned from the Royal Military Academy Sandhurst into the Duke of Wellington’s Regiment in 1999. He commanded at Company and Platoon levels interspersed with a variety of high level technical and program management roles.

During his 17 years within the Military, Edward has excelled both professionally and within the area of sport.  He has captained the RMAS and British Army Germany 1st XVs and represented the Army in tennis and golf.  His professional highlights include leading a unit during the invasion of Iraq in 2003, achieving promotion to Major at 30, the youngest in the British Army at the time, and being appointed as a Member of the British Empire for his leadership on the frontline in Afghanistan.

Edward is a proven international leader who thrives on mentoring the individual, developing teams and delivering success. This was most noticeably demonstrated when he successfully led 700 men and women from 6 different nations on combat missions whilst in Afghanistan.  Since leaving the Army Edward’s multinational leadership experience combined with his knowledge of the Arabic language and culture, has led him to research and write about the development of global leadership competencies at a post graduate level.

By combining his experiences of commanding soldiers on the front line, dealing with catastrophic events, transitioning into the business world and joining a public sector organisation he delivers a compelling, insightful and down to earth approach to leadership, management, resilience, risk and dealing with adversity.

Been inspired today? I have, here’s what I am doing about it? Out of my comfort zone, been putting it off , but with help as ever from the team at @CuriumSolutions @CuriumUS it should work out. #keepbusinessmoving #leadingfromhome who’s inspired you? Taken action, told them?

Please take some time to consider this offer from @Plus_Transition. This could change the landscape for transition in so many ways.

Following meetings with the MoD and the development of the early version application, I am pleased to announce the the Friends & Family Offer from Positive Transition Ltd. See more about it in our Memorandum of Information which you can receive if you email investors@plus-t.co.uk

A great pleasure to speak today about leadership and resilence with the water logic team. Thank you to @Andy_Curium for the opportunity.