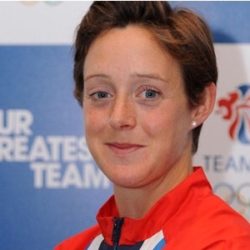 As a member of the Rio Olympics gold medal winning team, Hannah uses her experience of the highs and lows of elite sport to deliver hands on, practical guidance about the core principles of effective teamwork and how to achieve a high performance culture.

Hannah is a double Olympic medallist, with the record-breaking Great Britain Women’s hockey team, culminating in winning Gold at the 2016 Rio Olympics. She has a doctorate in Exercise Physiology and coaches leaders and teams in FTSE 100 companies.

Hannah provides valuable insights into the fundamental requirements of a performance culture and the core principles of effective teamwork, confidence to perform and resilience. Hannah’s ability to articulate her personal learnings from performing in an elite sporting environment and working with senior leadership teams around the world enables her to deliver insightful and personal Keynotes, presentations, seminars and candid Q & A’s.

She recently tested her principles on high performing teams whilst competing for Great Britain in the Clipper Round the World Yacht Race. Having previously had no sailing experience, she took on the challenge of ocean racing with a crew of 20 novice sailors.

Hannah was an integral member of the England and Great Britain hockey team that progressed from 8th in the world in 2009 to winning Gold at the Rio Olympics for the first time in their history. Hannah was also part of the team that won Gold at the European Championships in 2015, Bronze at the 2012 Olympic Games in London and Silver at the 2012 Champions Trophy in Argentina. However, she also experienced significant set-backs with the team in 2014 when they finished 11th at the World Cup – 18 months prior to the Rio Olympics.

Before becoming a full-time hockey player in 2009, Hannah completed her PhD in Environmental Exercise Physiology at Nottingham Trent University after gaining a BSc (Hons) in Sport and Exercise Science from Loughborough University. After retiring from professional sport, Hannah followed her passion for understanding how to maximise performance, individually and in collaboration with others, and qualified as an Executive Leadership Coach. She is the current Great Britain Hockey U23 Coach and Leadership and Team coach at Track Record.

Hannah reveals the critical success factors for achieving sustained high performance and provides insight into the methods and strategies used by Olympic athletes and individuals performing in world class teams.

“Hannah spoke from the heart in a humble, but confident manner. She was direct and self-critical sharing many anecdotes and learnings in her story. She had the audience’s complete attention throughout her well-constructed, logical talk and she generated a number of questions from the group at the end.

Hannah’s authentic style was a refreshing change, making it easier for delegates to relate to her story. Our team were inspired by her story and came away with a number of learnings and critical success factors for consistently winning teams.

I would confidently recommend Hannah as a highly motivational speaker to teams/ audiences who are enthusiastic about team effectiveness and achieving sustained high performance.”

“I have put Hannah forward for a number of speaking engagements covering everything from live broadcast interviews to panel discussions. She’s bright, personal and passionate; all of which comes through regardless of topic or platform. Whether putting forward a well-researched point or answering an impromptu question from the floor, Hannah is a natural communicator and I would recommend her without hesitation.”

“I liked the fact she was so open and gave a real insight about how the Olympics experience was for her. She left plenty of time for questions too which was good as there were loads! She didn’t hold back on anything either. I really enjoyed it!”

Well done to the @GBEDPWomen. So proud of this bunch. Take a moment to celebrate, reset and go again. @SimonLetchford 🙌

Moving the dial on performance through strengths. Register👇to listen to a top class panel of experts sharing how incorporating a strengths-based approach to organisational performance transforms organisations and changes lives. https://t.co/HOwHAlgYUE

4 weeks and counting and still @santanderuk have my account blocked & I’m unable to access my money. Customer services response “we have sent an email to the relevant department and are waiting for their response 🤦‍♂️ Shocking. Still getting charged my account fee 😂