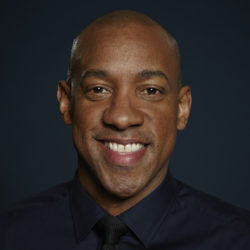 A forward who spent his club career with a number of teams, most notably Manchester United, Coventry City and Aston Villa; scoring 183 goals in his 613-game club career.

Dion Dublin is the former Manchester United footballer, turned popular TV personality. Dion has most recently presented Home Under The Hammer on BBC1 and has had a successful media career since retiring from football in 2008.

One of England’s best-loved footballers, Dion was best recognised for his 2 year spell at Manchester United, in which he scored on his debut. He was given legendary status at many of his other clubs including scoring 48 goals at Aston Villa where he was the joint top scorer in the Premier League in 1998. Dion also earnt four England caps when he was playing for Coventry City.

Dion has built a very successful media career as a football pundit for the BBC and Sky. He presented Late Kick Off for BBC1 East and can also be heard regularly on BBC Radio 5 Live.

Aside from his love of football, Dion is extremely passionate about music. He has invented his own instrument called ‘The Dube’ which is a percussion instrument. The Dube has been endorsed by the likes of Courtney Pine and has also been used by bands such as Feeder and The Maccabees.

“We all had a great time thank you. I sent Dion a text yesterday just saying what brilliant company he was. People on the table commented on the way he was with them and nothing was too much trouble.”

HUGE! Thank you to @NottsRacecourse & @TheJockeyClub for making my Dads day so special on Saturday! You couldn’t have done any more for us,and my Dad loved every minute!
James,Hannah and Lee
🙏🏾👏🏾👍🏾 BRILLIANT!

Thanks again to the @FA_PGMOL for having me host their… #PGMOLConference2022 it’s great having the (ONLY) mic,in a room FULL of Referees! haha
🤣🤪😉🫢🤣🤪😉🫢