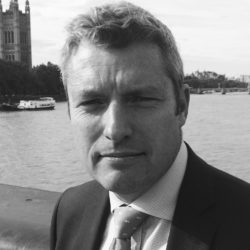 Dan is one of Britain’s foremost naval aviators and has personally advised Ministers on strategic programmes at the highest levels of Government. A proven leader, Dan has commanded an Air Station of 3,000 personnel and served on military operations all around the world. Dan is an influential thinker in the field of cultural behaviour in high performance teams and uses his real-world experience to bring alive the ‘art and science’ of leadership, followership, decision-making and risk.

Initially flying attack helicopters from Royal Navy destroyers on operations in Bosnia, Somalia and the Persian Gulf, Dan transitioned to the Sea Harrier strike-fighter and flew combat missions over Iraq and Sierra Leone from aircraft carriers. A specialist air warfare Instructor (UK TOPGUN) and operational test pilot, he was seconded to the US Navy, flying advanced F-18 Super-Hornet aircraft, to analyse new technologies, weapons and sensors. Flying from ships in all weathers, day and night and conducting flight test provided the ideal context to develop highly motivated and successful teams, able to operate safely under the extremes of performance.

With a Masters in Defence and Strategic Studies, Dan has held a number of senior leadership appointments; twice working at the Department of State, presiding over an accident investigation and delivering complex change programmes. Working in the Ministry of Defence, Dan blended quantitative analysis with qualitative judgement to directly advise Ministers and the Cabinet Office on strategic programmes.

A successful practitioner in the field of culture, organisational structures and leadership, Dan’s independent report into a high profile, fatal air accident was commended by HM Coroner and used as the primary evidence at the subsequent Inquest. As commanding officer of Royal Naval Air Station Culdrose, Dan built and improved high-performance teams whilst running one of the largest single site employers in the country.

Dan has proven himself in the practical implementation of leadership and teamwork in high pressure environments, across a broad range of areas. An experienced trainer with an engaging and interactive style, he carefully selects entertaining and thought-provoking stories to bring alive the required learning principles and outcomes. Adept in the development of positive cultures and human relationships within teams, Dan draws tangible parallels from his diverse background that resonate with any audience.

“The real measure of Danny’s positive impact is the multiple requests that have followed for him to return and speak to various work groups ranging from hangar technicians to head office staff and the fact that months later people are still reflecting on and referring to the key messages he left his audience with.”

“I find any opportunity to listen to Dan to be a fascinating one. Whilst his focus is naturally aligned to his considerable experiences of leadership in the Royal Navy, his reflections are ones upon which we can all draw beyond the military landscape into our own perspective. His style is both authentic and humorous and serves any audience well for generating wider debate.”

“Dan’s elegant recollections of his rare experiences in extreme risk military air combat situations demonstrate vividly the critical importance both of strong leadership and of building a team culture in organisations that succeed.”