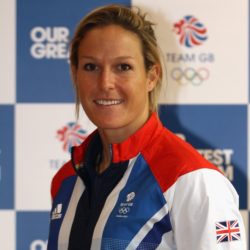 Recognised as one of the greatest hockey defenders in the world, Crista enjoyed a remarkable career, which culminated gold at the 2016 Olympics in Rio. Since retirement from sport Crista has gone on to excel as a keynote speaker, translating her journey of success for others to see what is possible.

Crista has over 185 Great Britain and England combined caps, Commonwealth, World Cup and European cup bronze medals, was awarded Great Britain’s Hockey player of the year (2006) and named three times in the International Hockey Federation’s World All Stars Team (2006, 2007, 2010). She was Great Britain’s top goal scorer in the Beijing Olympics and joint top goal scorer at the London Games.

Despite announcing her retirement from Hockey post-London, in 2015 she was invited back to fight for a place in the Rio Olympic Games squad and her subsequent ambitions for a third Olympic appearance were not only realised but brought Olympic Gold in the most dramatic of Finals.

Since the Olympics, Crista has turned her focus to align her passions using broadcasting as a medium to educate and motivate others. She has presented a documentary at the Crufts Dog Show for Channel 4, working alongside veteran presenters such as Clare Balding and as a roaming reporter for BT Sport at the Summer Internationals of the England Women’s Hockey team. Crista has also made appearances on Sky Sports Women in Sports programme and BBC TV’s The One Show.

On top of her success within sport and the media, Crista has also established herself as a highly engaging motivational speaker. Translating her success and journey for others to help them see what is possible with the same effort, whether this is in the classroom, hockey pitch or boardroom. As a speaker, Crista brings a wealth of experience gained on the Hockey field into a business environment; covering Leadership, Performance Teamwork and Motivation. Having worked for many years in a business environment, she is totally at home in the corporate world.

“Crista is a charismatic, engaging speaker whose talk was inspiring and useful in equal measure. She connected perfectly with our corporate audience, building rapport with both our senior Exec’s and more junior staff.”

“Crista’s story, someone with real passion for what she does, wherever she does applies it, professionally delivered making it relevant and real.”

“I found Crista Cullen very inspiring – I liked how she fronted up to difficult issues for the benefit of the team goal.”

When you are doing some flying practice & trying to clear the runway... “Ozzy” the ostrich decides that you are a rival and he is going to take on the microlight 😳 His legs have all turned pink which means he is ready to attract females...think we were cramping his style 😂

Thanks for the nomination @sallywalton23 get your hockey coaching pics up peeps. While we are all locked indoors let’s see some pics of you doing your ‘thang’ outdoors☝️get your pics up @JennieBimson @MaddieHinch @becky_duggan 😘 my face on the last one says it all 😂😂

Great to do a coaching session with the girls U14s today @KGS_Hockey such great kids with a lot of talent. Then had a little chat with them about our journey to gold. Hard work and sticking together... @edwindoransport #opportunity #attitude

On this #worldwildlifeday it is important to recognise the dominant and the docile,the large and the small,the beauty and the beasts.We have a duty to protect their habitat.Join us @tofautitribe as we try to #bethedifference #bettertogether #naturephotography #nature #giveback