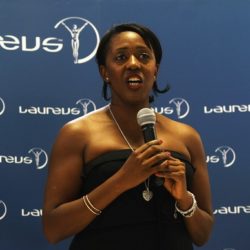 As an international athlete triple jumper Connie Henry pushed herself to her limits to be the very best she could be. But sport was always about more than winning medals for Connie, and 20 years after her biggest sporting achievement she is mentoring and supporting scores of young people at the centre where she first honed her talents.

Connie is a former International Triple Jumper and 1998 Commonwealth Games Bronze medallist. Connie has broadcast experience with companies including BBC, ITV, Sky and the International Association of Athletics Federation, as well as becoming Director of the Track Academy.

Connie’s own experiences of dysfunctional family life and lack of childhood security thrust her into the sporting arena, joining the Shaftesbury Barnet Harriers at just 15 years old. Connie’s determination and commitment continued at St Mary’s University when studying Sports Science and History and her post-graduate teacher training course at Brunel University, while becoming one of the best athletes in the country.

In the autumn of 1997, she moved to Sydney to train with Keith Connor, Australian head coach and British Olympic triple jump medallist, and within 2 years Connie travelled to Kuala Lumpur to compete in the 1998 Commonwealth Games, taking home bronze.

The next phase for Connie saw her gain freelance broadcasting experience with several organisations including the BBC, Sky and the International Association of Athletics Federation. Her work included a memorable stint with boxing promoter Frank Warren, during which she found herself ringside at the heavyweight match between Wladimir Klitschko and Danny Williams in Las Vegas.

In 2007 Connie was approached by Willesden Sports Centre, asking her to lead new track and field activities there. Connie utilised her contacts from the athletics world to grow the temporary work at the centre into 10 years of the Track Academy, a charity which has changed the lives of hundreds of young people.

Have you signed up to our open competition yet? It's taking place on July 14 and is going to be a super event - visit https://t.co/BnPi1h9gUb to sign up 😀 😀

On your marks, get set, go...to sign up to our open competition on July 14! Visit https://t.co/BnPi1h9gUb to enter.