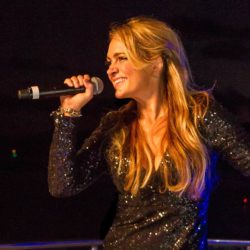 Chrissy is an event host and singer with a comedic flare and dynamic stage presence. She has spent years perfecting her own interactive experiences, which have been enjoyed by hundreds of companies across the globe.

Chrissy Bray is an accomplished comedic presenter with years of experience in television, radio, public and corporate functions. A talented improviser and versatile host, Chrissy is able to MC every style of occasion, from gala balls to intimate birthday parties and everything in between.

From hosting the 2010 World Cup Fan Fest at Darling Harbour, Sydney for over 20,000 people, to presenting live on Channel Ten, Chrissy Bray has a wealth of experience both in the corporate sector and in the entertainment industry.

Having been Australia’s only female warm up comedian in the cutthroat world of television, Chrissy honed her skills learning how to keep audiences enthralled with her sharp banter and natural charm.

Her vocal prowess and ability to engage audiences has seen Chrissy performing around the world alongside various DJs. From the Melbourne Cup and Formula One in Australia, to Love Box music festival in London to DISTRIKT at Burning Man festival in the USA, Chrissy’s passion for electronic music coupled with her magnetic stage presence has captured audience’s imaginations everywhere.

Now based in London, Chrissy manages her singing and presenting career in both the UK and Australia.

With several themes to suit any celebration, Chrissy’s curated experiences are highly adaptable and have been tried and tested with outstanding results in every scenario.

“If we ever need a host for anything, we use Chrissy.”

Master Your Mind, Master your Life: https://t.co/bt7VlomV8E via @YouTube

Put awesomeness into your brain and see what happens: https://t.co/jTNLfnw96N via @YouTube

Why you never take brilliant advice: https://t.co/Idqt6T5ewm via @YouTube