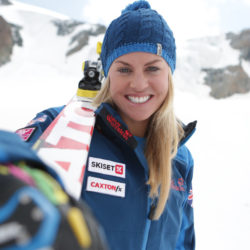 In a time where competing at a Winter Olympics was unusual for a British athlete, Chemmy defied the odds and pioneered a skiing movement that has inspired a generation. This resulted in not just skiers, but all British Winter Sport athletes seeing the Winter Olympics as a realistic and achievable goal.

Chemmy Alcott is a former Olympian who represented Team GB throughout a 20 year sporting career reaching a high of 8th in the world. She became the first and only British ski racer to win a run in the World Cup.

Since retiring from alpine skiing after Sochi in 2014, she has spent her time challenging herself partaking in the World’s Toughest Ski Race in Greenland in March 2015, 100 mile road race Ride London and other sporting endeavours whilst being a regular presenter of BBC’s Ski Sunday TV Show and commentating on Eurosport.

In 2018, Chemmy became a well-loved BBC Winter Olympic Sport presenter. She was enthusiastic, empathetic and gave a unique insight into the games that only someone who has been through the experience as an athlete could give.

Chemmy created the initiative X-Elle, to develop young girl’s confidence in and through sport with United Learning and toured the UK visiting schools with an eventual reach of impacting the lives of 10,000 young girls.

She is also a prominent public speaker and host, touring the world relaying her inspirational story of overcoming adversity (49 broken bones including her neck when she was 11 and her leg which required over 1028 minutes of surgery) traveling all around the UK and to Dubai and Rwanda.

As a very proactive Ambassador for Right To Play each year she hosts The Big Red Ball which last year raised a massive £650,000 for areas of conflict resolution due in part to a documentary where Chemmy visited Rwanda to learn more about the power of sport. During her recent trip to Greenland, alongside the Arctic V, she helped raise £18,000 for Ski4Cancer and continues to be inspired by her charity work.

“Was great to meet Chemmy on Friday. She made a really strong impression on the whole Diageo team.”

Have just heard the tragic news that Sean Rice, my partner from DOI has passed away. The world will miss your amazing energy and you healing hands. All my love to J and S. x

Oh my…… that was a big hit. She’s sitting up. Everything is crossed for #goggia

Feuz pulling out a nifty slalom turn there!

Fantastic news…. The conditions are absolutely money right now. After the rain over new year, new snow has come and cold weather… let’s have it