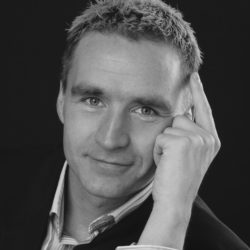 Motivational and Keynote Business Speaker on Risk and Decision Making

Caspar’s insights provide ground breaking stimulation for individuals or organisations who are risk averse, who are grappling with uncertainty in their marketplace, or simply looking for their next competitive edge in this age of uncertainty.

Caspar is a highly distinctive corporate speaker with a unique and challenging message that requires people to question many of the things they take for granted.

Caspar Berry, started his career in the first series of Byker Grove on BBC1 alongside Ant and Dec. He went on to read Economics and Anthropology at Cambridge and – after setting his sights on becoming a professional film writer – had his first screenplay produced by Film Four whilst in his final year.

By the time he was 23 Caspar was writing for Miramax and Columbia Tri-Star. At 25 he moved to Las Vegas and became a professional poker player for the next three years of his life.

In 2002 he co-founded Twenty First Century Media and built it into the fastest growing audiovisual media company in the North East of England. At this time he also began his career as a speaker and catalyst for new thinking within business, specialising in risk-taking and decision-making. In 2008 his company was sold to Bob Geldof’s media giant, Ten Alps.

He returned to his television roots as the presenter and poker expert on a number of TV shows, most notably: Poker Night Live, voted Britain’s best poker show; and Sky Poker, the country’s premier nightly poker show. He also appeared on Sky Sports, was the poker strategy writer for Flush magazine and was also the poker adviser on the James Bond movie, Casino Royale.

Caspar is a highly distinctive corporate speaker with a unique and challenging message that requires people to question many of the things they take for granted. Drawing from his diverse range of experiences in poker, business and life, Caspar offers a fresh look at the way individuals approach risk and take decisions in order to gain a competitive edge. Caspar’s key message is that understanding how to take calculated risks is critical in the creation of dynamic leaders and managers who will innovate and change the world around them.

Caspar is also a charismatic host, often leading an end of day Poker activity as a follow through from his key note speech or workshops sessions. During which Caspar back-references his insights about risks, decision or luck to coach his audience to play poker and then commenting on and hosting a poker tournament.

He has now delivered over 1000 sessions as a speaker and trainer for hundreds of organisations including Google, The Met Police, IBM, Castrol, KPMG, ASDA, Orange, Eon, Ernst and Young, BAA and Ashridge Management School.

“Brilliant, intelligent messages delivered with passion and knowledge. The best talk from an outside speaker I have ever seen.”

“Caspar’s presentation stimulated a great deal of very productive discussion about all our attitudes to risk taking and really helped crystallise some of the critical decisions we need to make across the business. It helped us understand each other as individuals and will be talked about and referenced for a long time to come. We would highly recommend it to any executive team in business.”

“Caspar is an inspirational speaker but does it with content and delivery that captures the imagination and challenges the audience to really think in a different way. His delivery is interactive, entertaining and very thought provoking and is fantastic for delivering a great session with a difference.”

I don’t see any difference between this and the beginnings of fascism. If there’s no accountability then what is there to stop him from screwing with the process of democracy itself?

I am utterly shattered to hear this terrible news about my Ray.
I can be anywhere in the world & people will come up & tell me their favorite movie is Goodfellas. Then they always ask what was the best part of making that movie. My response has always been the same…Ray Liotta.

Positive asylum decisions are at their highest rate for many years. One reason is in fact Brexit. 2021 is first year UK is no longer part of Dublin Agreement meaning we can no longer refuse a refugee's application on basis they've already crossed into an EU country.

@RadioFreeTom I feel like folks have a hard time grasping the fact that the number of school shootings is unacceptably high, and yet the odds their child will ever experience one are quite low.

Let this sink in