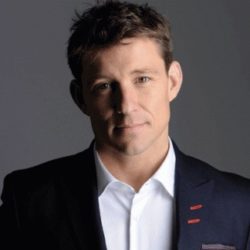 One of Britain’s most popular Television Presenters

Ben currently co-presents Good Morning Britain on ITV1 and is passionate about people, their lives, their stories and their challenges. Both on and off screen he has a genuine warmth and ability to connect with the people he meets.

Ben is one of Britain’s most popular television presenters. After waking up with the nation for 10 years on the GMTV sofa, he is now an anchor at Sky Sports, covering the Champions League and Carling Cup as well as co-presenting Goals On Sunday.

Ben is also the presenter of choice for programmes involving spectacular challenges (Safebreakers, The Krypton Factor), enlightening an audience (Harry Potter: Behind the Magic) and high-profile entertainment (The Xtra Factor, One Night Only with Rod Stewart, 1 vs. 100). Ben is passionate about people – their lives, their stories and their challenges. He has a genuine warmth and ability to bring out the best in others.

Having broken four Guinness World Records, Ben is always seeking to conquer his next extreme physical feat. He loves endurance and extreme sports, and his sense of adventure has often led him to take on some amazing and gruelling challenges to raise awareness for the special causes he supports. Over the past 10 years, Ben has completed 14 marathons, run across the UK twice, climbed Mount Kilimanjaro with Gary Barlow, Chris Moyles and Cheryl Cole, been through three months of intensive boxing training at The Fitzroy Lodge and played for England at Soccer

Aid. Consultant, host and brand ambassador – Ben works on effective communication strategies, inspiring a range of different businesses. He hosts high-profile events, trains leaders in the art of brilliant communication and helps to build brands working with the likes of Sony, Range Rover, British Airways and the FA.

That is a jackpot smile Steve!!! Happy birthday Ethan hope the cake tastes as good as it looks!! #tippingpoint

This was 9 months ago 😳 in a different life time, but finally ⁦@JoeJoyceBoxing⁩ and ⁦⁦@DynamiteDubois⁩ get to face each other in the ring. Its been a long time coming and I can’t wait. Good luck to both fighters ⁦@frankwarren_tv⁩ 🥊🔥#DuboisJoyce

No one beats Richard to a bottom feeder 🤣 We finally let @Herring1967 on Lucky Stars, and it’s a cracker - catch Richard, @oliviajade_att and @mrjoemcfadden for the last ep of the series this Sunday at 7pm ✨ #TippingPoint @TippingPointITV