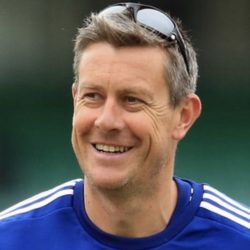 Ashley represented England in 54 test matches and 61 one day internationals. He was a member of the famous 2005 Ashes winning team in possibly the greatest Ashes series of all time. Ashley is a National selector and England Head Coach. In 2017 he re-joined Warwickshire County Cricket Club as Sport Director.

Ashley represented England in 54 test matches and 61 one day internationals. He was a member of the famous 2005 Ashes winning team in possibly the greatest Ashes series of all time. Ashley was also a National Selector and England Head Coach and in January of this year, he re-joined Warwickshire County Cricket Club as Sport Director; tasked with the management of the team during their current period of transition.

Ashley went on to enjoy a highly successful cricketing career, going on to become England’s number one spinner and a regular in the Test match team. Sadly, following an injury in 2007, Ashley was forced to retire from professional cricket, however within a month he was appointed as the Director of Cricket at Warwickshire, after the team had suffered relegation in both 4 day and 1 day formats. His aim was to bring respect and success back to the club and to create something sustainable. In five years Ashley had built a team that won 4 titles and had 2 second place finishes culminating in winning the County Championship in 2012. Most of this success was built on the foundations of good people, with a shared vision in a great environment and culture.

Between 2009 and 2014, during one of England Crickets most successful periods, Ashley also sat on the selection committee alongside Geoff Miller, James Whitaker and Andy Flower. He is still to this day the youngest ever appointed national selector for England.

After their County Championship success in 2012, Ashley was appointed as Head coach of England’s limited overs sides. In January of this year Ashley re-joined Warwickshire County Cricket Club in the new position of Sport Director. A new role encompassing all cricket, at a more strategic level. Ashley is currently tasked with the management of the team through a period of transition, which will involve a mix of bringing in the best people from the outside and having the very best development systems in place at Edgbaston. Ashley understands that this is rarely a smooth process and is able to draw on his previous experience of detailed planning, goal setting, dealing with setbacks, resilience, winning and losing to help guide the club.