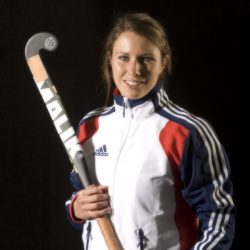 Anne’s sporting success is all the more remarkable when you consider there was a time when Anne thought she would never play Hockey again, after undergoing a pioneering double knee operation.

Double Olympian Anne Panter is a midfielder for the English Field Hockey International team and competed in the 2008 Beijing Olympics as well as the 2012 London Olympics where the team achieved a Bronze medal.

In addition to her Olympic success Anne studied Mathematics and Economics at the University of Nottingham. Competing at the highest level in hockey she has played internationally in the European Championship and the Champions Trophy. Her sporting success is all the more remarkable when you consider there was a time when Anne thought she would never play hockey again after undergoing a pioneering double operation. This involved the reconstruction of the post cruciate ligament in her left knee and a patella tendon debridement. The injury kept her in recovery for over two years in between the Beijing and London Olympics. Anne currently plays for Leicester and has her sights firmly set on Rio 2016. She follows the motto “Every accomplishment starts with the decision to try.”

We can’t wait to see England and Ireland play in a brand new, fast paced format at RugbyX this October! 🗓️

Very proud to see the event we created, built and brought to reality go on sale.

Very excited to be a part of this... #RugbyAccelerated #RugbyX

A new 5v5 format of rugby coming to the O2 in October. #RugbyAccelerated

Are you ready? The future of rugby is coming...